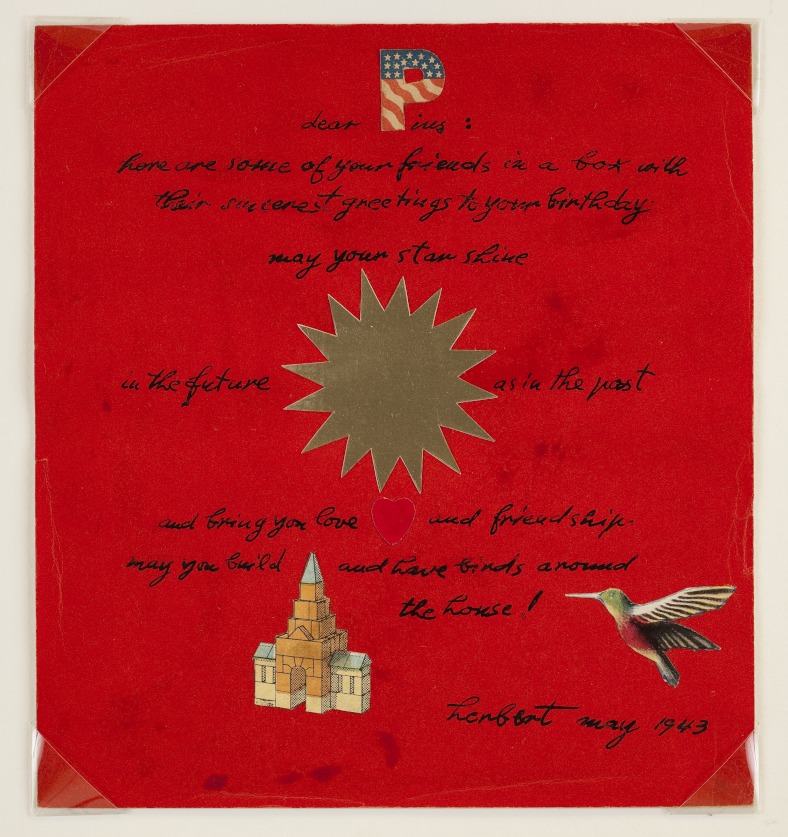 On May 18, 1943, on the occasion of his sixtieth birthday, Walter Gropius opened an extraordinary gift; a handmade box filled with greetings from his closest friends and colleagues. Each card was identical in size but entirely original in decoration and spirit. The products of artists, architects, designers, and neighbors, they had arrived from around the corner and across the country. Herbert Bayer, Gropius’s close friend and former colleague at the Bauhaus school in Germany, had organized the project and engaged Gropius’s wife in the planning. Together, they contacted scores of Gropius’s friends. Although the war in Europe made it difficult to reach some people, fifty of those who received the invitation created personal messages to the man they all admired.

Bayer wrote the cover card to “pius,” as Gropius’s Bauhaus friends called him. Using all lower-case letters in the style pioneered by the school, he writes, “here are some of your friends in a box with their sincerest greetings to your birthday: may your star shine in the future as in the past and bring you love and friendship. may you build and have birds around the house!”

Ten years later, a second set of cards was given the Gropius to celebrate his seventieth birthday, by which time his circle of friends had grown even larger. The cards remained in the Gropiuses’ house throughout their lives. They offer a remarkable window into Gropius’s personal relationships.  He was a man who inspired his students and forged enduring friendships with an international cadre of creative people.